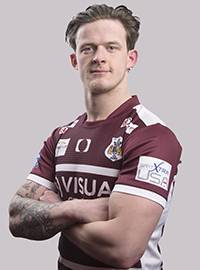 Carter joined the Dons ahead of the 2020 campaign after spending all of his career prior to that with York City Knights.

After making his debut for the club in 2013, the hooker went on to make more than 50 appearances during his time at Bootham Crescent. He was part of the squad that won promotion from Betfred League One with the Knights in 2018, and will be hoping to achieve the same feat with the Dons this season.