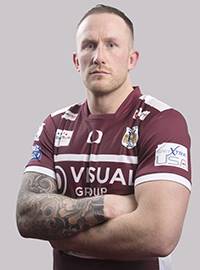 Doncaster-born Smeaton arrived at the Keepmoat Stadium at the end of 2019 boasting a wealth of experience on his CV. Having started his career at Featherstone Rovers, he made more than 80 appearances at the LD Nutrition Stadium before moving to Sheffield Eagles in 2015.

He spent just one season in South Yorkshire before joining fellow Betfred Championship side Batley Bulldogs a year later. He played 76 times and scored 19 tries for the Bulldogs, as he played a pivotal part in helping them reach the middle 8's in 2016, where they went up against the likes of Leeds Rhinos and Huddersfield Giants.

The 31-year-old's addition to the squad will add more quality to the Dons' right edge in 2019.