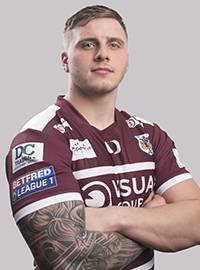 Sponsored by: Alicia and Zach Kelsall

Foster initially joined the Dons in 2015 and spent two seasons with the club before joining Dewsbury Rams.

The back-rower made just two substitute appearances for the Rams and soon made a switch to Betfred League One side Hunslet in 2018.

The 24-year-old turned out 17 times for the Parksiders in his sole season at the club, before making a return to the Keepmoat Stadium. His first year back in South Yorkshire was a real standout from a personal point of view and saw him land the Man of Steel award at the club's end of season awards night. He was named as the Dons' captain by head coach Richard Horne ahead of the 2020 campaign.