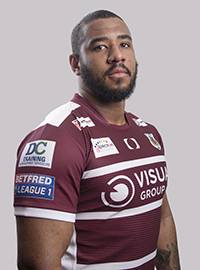 After coming through the system at Super League side Huddersfield Giants, Peltier joined Keighley Cougars in 2014 and was given the opportunity to establish himself as a powerful prop-forward.

After making almost 50 appearances for the Cougars, he joined West Yorkshire rivals Bradford and played a key role in the Bulls winning promotion to the Championship in 2018, before they established themselves back in the second tier last season.

The signature of the Jamaica international represented something of a coup for Richard Horne, and Peltier will be hoping to add a second promotion to his CV in 2020.