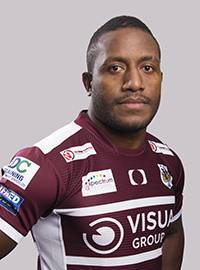 Sponsored by: Jack Cox and family

After impressing in his homeland of Papua New Guinea, Boas arrived in the UK to sign for Featherstone Rovers alongside brother Ase at the start of 2019.

Capable of playing in the halves or at hooker, he struggled to nail down a place in the Rovers' starting line-up and joined the Dons initially on loan in April. He made an immediate impression at the club with length of the field tries becoming his trademark.

He signed permanently at the end of 2019 and scored against Great Britain Lions for PNG before returning to the UK midway through the Dons' pre-season schedule.