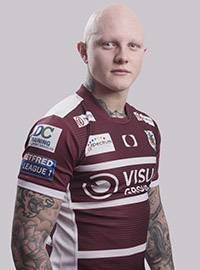 After starting his career in rugby union, Halliday joined the Dons on an initial loan from Betfred Championship side Dewsbury Rams midway through the 2019 campaign.

He made an immediate impact, scoring five tries on his debut in a win over West Wales Raiders in the 1895 Cup, before suffering a shoulder injury a week later. He penned a permanent deal with the club once he returned to full fitness and extended his stay for the 2020 season.