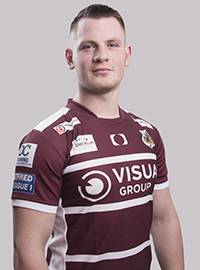 After starting his career with Castleford Tigers, Douglas made a handful of appearances in Super League before deciding to join the Dons for the 2019 season.

The prop-forward chose the Dons despite interest from several Betfred Championship clubs, and had an immediate impact in his debut season with the club as they reached the play-off semi-final.

He made 18 appearances, scoring five tries before agreeing a new deal for the 2020 campaign.