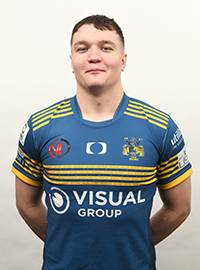 The loose forward joined the Dons after leaving Betfred Championship side Bradford Bulls at the end of 2017.

He had just returned from representing Scotland at the Rugby League World Cup, where he played against the likes of New Zealand and Samoa.

After a solid start to his Dons career, Wilkinson suffered a serious knee injury in June 2018 which would keep him out for the best part of a year. Despite a stop-start 18 months or so, he is fit and ready to get back to his best after penning a new deal for 2020.