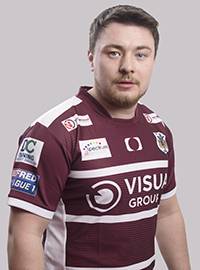 The influential half-back joined the Dons midway through 2018 from Keighley Cougars.

Having starter his career in Super League with Hull Kingston Rovers, Beharrell made just one appearance for the Robins before joining Newcastle Thunder for the 2014 campaign. He spent two seasons at Kingston Park before joining Keighley via a stint at Swinton Lions.

The 25-year-old enjoyed 18 months in West Yorkshire before moving to the Keepmoat Stadium, and has gone on to score an impressive 286 points in 35 games prior to the 2020 campaign.

Beharrell's efforts were rewarded with a new two-year deal at the end of 2019.