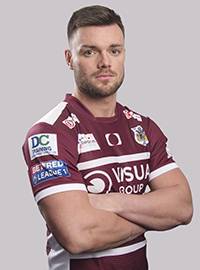 England joined the Dons permanently ahead of the 2017 campaign after putting his injury problems from the seasons prior to that behind him.

The former Featherstone and Salford back-rower became an established part of Richard Horne's side, and went on to win multiple accolades at the club's 2018 Player of the Year awards.

Despite a frustrating campaign in 2019, the 25-year-old will be hoping for a big year in 2020 with plenty of competition for places in the second row.