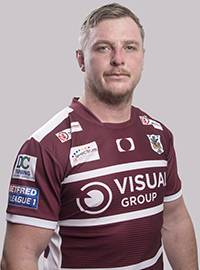 Brother of head coach Richard, Graeme joined the Dons for the 2020 campaign after leaving Betfred Championship side York City Knights.

Horne came through the youth system at Hull FC, and made more than 120 appearances during his time at the club, which included playing in a Super League Grand Final and being capped twice by England before he joined Huddersfield in 2010.

After two seasons in West Yorkshire he returned to the city of Hull to play in the red and white of Hull Kingston Rovers, where he spent five years before signing for York. His experience proved to be key as he helped the Knights win promotion to the second tier, where they kicked on to reach the Championship play-offs in 2019.

He will be hoping to have a similar effect on the Dons' promotion push in 2020.