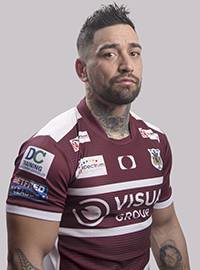 Former Man of Steel Chase joined the Dons midway through the 2019 campaign and was a major coup for the club given his achievements in the game.

A New Zealand-born England international, Chase played in the NRL for Wests Tigers and St.George Illawarra Dragons before moving to the UK to join Castleford Tigers in 2009. Having burst onto the scene in Super League he was named as the 2009 Man of Steel, and went on to score 47 tries in 129 appearances before joining Salford in 2014.

A spell with Leigh and a return to the Tigers followed, before he joined the Dons after a spell away from the game. He scored on his debut against Whitehaven in 2019 and ended the campaign with three tries in nine appearances before agreeing a new contract for 2020.