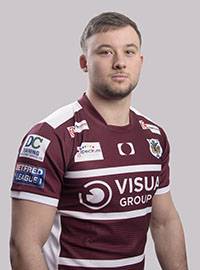 Sponsored by: In memory of Don Brooks

Doherty joined the Dons while the club were still in the Championship back in 2015.

He arrived after a spell in Australia and proved himself to be comfortable anywhere across the back-line. In recent years though he has firmly established himself as an out and out winger, coming up with several important tries in play-off campaigns.

The 26-year-old has scored 58 tries in 111 appearances prior to the 2020 campaign, including 20 last season which earned him a new deal at the club.